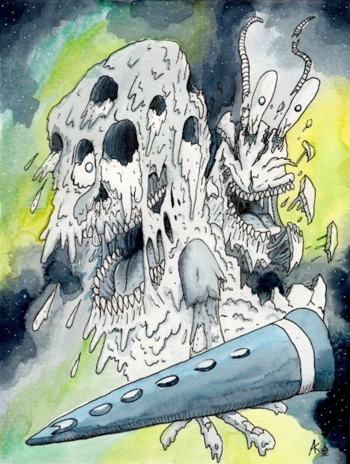 The Bikini Bottom Horror is a horror webcomic featuring the setting and characters of SpongeBob SquarePants. Created by Reddit user u/stillinthesimulation, the comic began as a one-shot about an unhinged Patrick Star who betrays and devours SpongeBob. It was posted to the subreddit r/ImSorryJon

, a sub for horror-themed Garfield fanart that also has "non-Garfield weekends".

After it received a positive reception, u/stillinthesimulation chose to continue the story with Sandy Cheeks and SpongeBob's other friends seeking to avenge the fallen fry cook, learning of the existence of the Tortured One—a Patrick clone who possessed the original, is the one who killed SpongeBob, and desires the destruction of all Bikini Bottom—and figuring out how to stop his rampage while discovering his grisly origins. The comic has since exploded in popularity. The comic has now begun its epilogue, and while new issues are still posted on r/ImSorryJon every Saturday, it also has its own subreddit

, and the entire story can be found in those places as well.

If you wish to jump in from the beginning, the entire comic thus far can be read from here