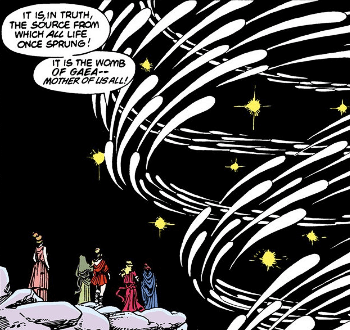 A specific form of the afterlife, a nexus where souls/hearts/spirits go to die, and sometimes where they come from. This is sometimes implied to be a physical place, or maybe in another dimension. In Western media, it has parallels to Eastern religion aside from occasional artsy substitutions, and a very good way to refer to the concept of life and death when a series may not allow you do to so without offending Media Watchdogs by portraying Heaven. Naturally very common in anime.

See also Sentient Cosmic Force. Compare Spirit World. May be part of the conflict in a setting where Harmony Versus Discipline is used. Not to be confused with AIM's Twitter-esque status update feature.