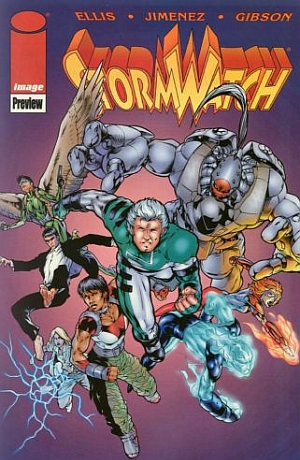 My name is Henry Bendix. I am The Weatherman.
I am the controller of Stormwatch, the United Nations special crisis intervention team. I am the world's policeman.
I am the Weatherman — and I've got your New World Order right here.
Advertisement:

Stormwatch is a series originally created by Jim Lee and Brandon Choi under Lee's studio Wildstorm Productions in association with Image Comics in 1993. In 1996, Warren Ellis took over writing duties, making it a critical darling and fan favorite.

The comics follow the eponymous Stormwatch, a fictional United Nations-sponsored superhero team in the Wildstorm Universe (originally the Image Universe). Unlike traditional superteams, they receive assignments from the United Nations; the leadership of a UN member nation has to issue a formal request for Stormwatch to act. Once called, they partake in various endeavors, such as foiling terrorist plots, preventing national disturbances or thwarting aspiring super-villains.

Ellis' run on the title introduced several memorable characters, such as the retired and cynical Jenny Sparks and urban empath Jack Hawksmoor. Ellis also didn't shy away from both political commentary (Stormwatch having to fight a corrupt and hostile U.S. government on multiple occasions) and commentary on the genre of comics as a whole (the history of Jenny Sparks). It also had the main leader of Stormwatch, Henry Bendix, reveal himself as a manipulative sociopath before he's forced to leave the organization. In 1997, most of Stormwatch was killed offscreen or Put on a Bus in the Intercontinuity Crossover Wild C.A.T.s (WildStorm)/Aliens when the title was cancelled, and Ellis turned the surviving black ops unit 'Stormwatch Black' into the nucleus of The Authority.

The Stormwatch brand has been revived three times since then: first, Stormwatch: Team Achilles (2002-2005), a paramilitary team of Badass Normal Cape Busters. The title was cancelled unexpectedly when its writer was revealed to be faking the military background he was using to sell the book. The second incarnation, Stormwatch: Post Human Division, drops the paramilitary and advanced tech aspects of Team Achilles, and has a even mix of supers and non-supers trying to do the job with a drastically reduced budget.

The third, going back to simply Stormwatch again, is by Paul Cornell and incorporates the team into The DCU as part of DC's line-wide relaunch in 2011 (the "New 52" or the "DCnU"). Stormwatch is a covert organization of superhumans that has been protecting the Earth from within the shadows for centuries, and they regard themselves as the "professionals" compared to Superman and the new wave of "superheroes" he inspired. The Martian Manhunter was a member of Stormwatch this time around, after an offscreen period serving with the Justice League that ended badly. He summed up the difference between the groups by saying that when he's with the League he's a hero, and when he's with Stormwatch he's a soldier.

As of issue 19, after the first try proved to not be as successful as DC had hoped, it got re-rebooted, with writer Jim Starlin taking things back to something more similar to how they were in Wildstorm, complete with original logo. Previous stories were largely erased, Apollo and Midnighter went back to their old costumes, the Bleed was re-introduced, Skywatch was once again made their base of operations, and more classic Stormwatch characters like Hellstrike and Fuji were brought in. Though some elements of Cornell's set up remained, such as the Shadow Lords, it was pretty much a complete fresh start. The change resulted in a Broken Base. Fans of the first 18 issues were NOT pleased with the change, due to it erasing events from continuity and heading in a whole new direction, while fans of the Wildstorm incarnation mostly rejoiced. Since the first storyline was "Something's happened to Stormwatch history; we need to Set Right What Once Went Wrong", it's unclear how permanent Starlin intended the changes to be (especially given that the new set up contradicted Demon Knights and All-Star Western's "19th Century Stormwatch"). Unfortunately, the re-reboot didn't succeed in winning new readers, and DC cancelled the Stormwatch series, but not before the very last issue re-re-rebooted Stormwatch back to the #1-18 continuity.