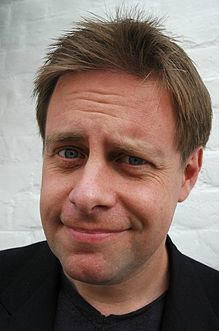 Paul Douglas Cornell (born 18 July 1967) is a British writer. He got the chance to become a Promoted Fanboy when he was asked to write for the Doctor Who New Adventures. Among his contributions to the Doctor Who Expanded Universe was Bernice Summerfield, an Ensemble Dark Horse who spun off into her own series. He also wrote Scream of the Shalka, a (in retrospect) Alternate Continuity web-based animated series in which (he claims) the Doctor and the Master are totally doin' it. Since Doctor Who's return, he has written the episodes "Father's Day", "Human Nature", and "The Family of Blood".

He has also written for comics including Captain Britain and MI13, the "Black Ring" story arc in Action Comics, Saucer Country and Batman And Robin, and has written Pulse, a well-received medical horror pilot for BBC3. In the DC Comics' New 52, he kicked off the new Stormwatch and Demon Knights. In 2017, he announced his "retirement" from working on projects not owned by him.

Works by Paul Cornell with their own trope pages include:

He and his work are known for these tropes: