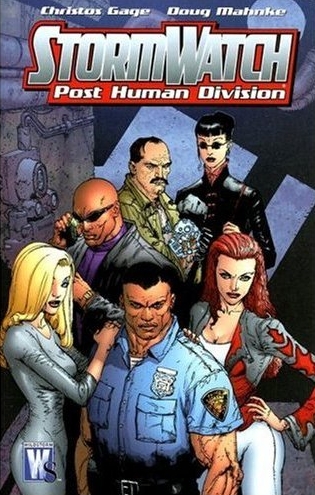 "Earth's post-humans are about to find out humanity's not dead yet."
— Christos Gage
Advertisement:

The 2007 iteration of Stormwatch created by Christos Gage and (mostly) drawn by Doug Mahnke, Stormwatch PHD emerged from the line-wide event known as Worldstorm. Part of the fallout was that the UN-sponsored Stormwatch Prime could no longer afford to be profligate with their funding. Then Jackson King, Weatherman of Stormwatch Prime, has a brainwave. He introduced PHD (Post-Human Division) with a mission statement of street-level Stormwatch ops on the cheap, crewed (for the most part) by people who would normally be support staff. Technically the series lasted for 24 issues (January, 2007-January, 2010), but it was retooled into effectively a different book after issue #12, due to Worlds' End, another line-wide event.

The lineup was as follows:

Fahrenheit/Lauren Pennington — A veteran of the original team, she sustained brain-damage in the same battle that saw John Doran's ascendancy, losing access to her pyrokinetic gifts. Despite this, her level of experience and knowledge of SPB combat ensure she remains an asset and she's getting fight training from ...

Liam Mendoza aka Callsign Paris — Iliad, not Hilton; otherwise deceptively boring. Late of Stormforce (the special ops army Stormwatch used to have), Paris is a specialist in counter-SPB close-quarters-combat (much like Jukko Hamalainen of Team Achilles.) He has a phenomenal talent for spotting vulnerability in opponents, be it in anatomy or in fighting style.

John Doran — NYPD cop, survived a Stormwatch Prime/horde-of-supervillains fracas and personally took down two supervillains himself. In over his head, but swimming hard.

The Machinist/Dino Manolis — ex-supervillain, low-budget high-effect gadgeteer of no small ability. Too bad he's potbellied, has a Ron Jeremy back and lives with his mother. Answers to whoever squeezes his balls the tightest.

Gorgeous/Wanda Durst — independently wealthy due to a string of supervillain ex-boyfriends/booty calls. On the surface, she's exactly what the codename says, but look north of the surgically-enhanced décolletage and you'll find an dizzyingly-high IQ and a scalpel sense for (post)human behavioural tics. Team profiler. Not to be trusted.

Black Betty — something of a fan favourite, she's a Professor of Metaphysics and assistant to one of the foremost magicians in the WSU (excluding The Doctors). As such, Jackson King recruited her to be PHD's supernatural specialist. She doesn't cast spells herself (for hilarious reasons) but knows magical theoretics inside-out. Her perpetual grin and Vera Black sunglasses hide atramentous depths.

Oh yeah, and Jackson King is their Augustus Gibbons. Having paid several prices - small and large alike - for the privilege of putting boot to ass for his planet, he conceived the PHD concept and recruited the team. Ultimately, he plans to have a PHD unit - cheap, effective, human - in every state.