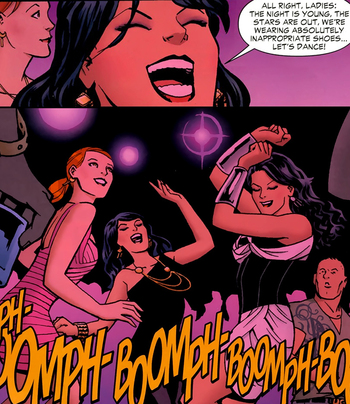 Their superpowers include being able to dance in inappropriate shoes.
"If you hear any noise, it ain't the boys, it's ladies night!"
— Kool & the Gang "Ladies Night"
Advertisement:

An installment of a work where all the characters of a specific gender, usually male, are absent or play minor roles, focusing on characters of the other gender, usually female, instead. If the ladies aren't particularly close, such as a Tomboy and Girly Girl dynamic, the circumstances forcing them to work together could lead to mutual respect, and possibly a friendship lasting the rest of the series.

If the genre is action or superhero, then the plot often involves the heroines having to rescue the heroes, usually with all female villains as well. Some writers will even go so far as to Hand Wave a justification by saying that for some reason the Phlebotinum du Jour is only dangerous to men.

A Sub-Trope of A Day in the Limelight, which covers any example of an episode where the focus is on a smaller part of the cast than usual. Might happen while the men are having a Stag Party. If the series has a mainly female cast, this might be gender-inverted with a guys' night out episode. See also Macho Disaster Expedition. Despite the name, it also includes Slumber Party stories where they don't go out.