Literature / The Years of Rice and Salt 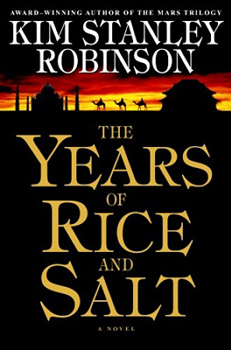 The Years of Rice and Salt is a an Alternate History novel by writer Kim Stanley Robinson, which depicts world history in an alternate timeline where the Black Plague epidemic that ravaged Europe in the 14th century was even more destructive, and killing 90% of the European population.

With Europe out of the game, the two civilizations that grow into global superpowers in the following centuries are the Islamic world and China. Eventually, their geopolitical rivalry escalates into total war.

The story is told from the perspective of a small group of characters, who get reincarnated into new but recognizable selves from generation to generation.

The Years of Rice and Salt contains examples of: