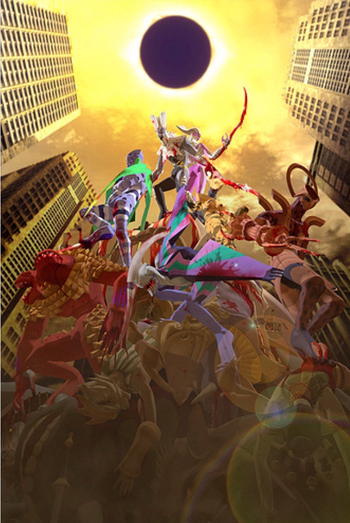 Om mani padme hm* Pearl of the holy lotus
"Rend... Slaughter... Devour your enemies! There is no other way to survive. You cannot escape your hunger, Warriors of Purgatory!"
— Digital Devil Saga Intro
Advertisement:

A Spinoff of the Shin Megami Tensei JRPG series for the PlayStation 2, divided into two parts. Developed by Atlus, the first game was released in Japan in 2004 with the second following in 2005.

All is not well in the realm of the Junkyard, a wartorn land living under blackened skies and perpetual rain. An endless war is being fought between six Tribes struggling for dominance over the Junkyard. The Karma Temple, a neutral party that moderates the war, has decreed that the Tribe who defeats all the others to control every sector of the Junkyard shall be awarded the ultimate prize: the right to ascend to Nirvana, a mythical paradise free of war or strife.

The Embryon Tribe, led by the calm and silent Serph, is locked in a stalemate with the nearby Vanguards Tribe. During one of their skirmishes, they encounter a mysterious egg-shaped relic that neither side can identify. Neither Tribe acknowledges ownership of the device, and both demand the other remove it or risk considering it as provocation for war. Before they can act, the relic explodes, sending out beams of light that pierce the bodies of the combatants and transform them into bloodthirsty demons. Regaining their senses and awakening to a bloodbath, Serph and the Embryon investigate the crater left by the relic and discover a young girl with black hair and no identifying Tag Ring.

Soon afterwards, the Karma Temple issue a new decree: that the Tribes must use their new-found demonic power- known as "Atma"- to break the stalemate of the Junkyard and devour their competition. They also add a new condition: that the winning Tribe must capture and present the black-haired girl to the Karma Temple in order to be allowed into Nirvana. But demonic strength was not the only thing granted to the inhabitants of the Junkyard; they have also awakened a new power called "emotion".

The two games are mostly dungeon crawlers with bits of plot driving the action in-between. The combat system marks the return of the Press Turn system from Shin Megami Tensei III: Nocturne. Each character can set up to eight skills, and unlike Nocturne any skill that has been learned is retained permanently. Skills are learned by buying "Mantra" from Karma Terminals and earning enough Atma Points to complete them. By learning one Mantra, advanced Mantra of that type are unlocked. Hunt skills can be used to greatly increase the amount of Atma Points harvested from an enemy at the risk of developing a stomachache and gaining none.

There is also a five-volume series of novels from 2011 written by Yu Godai called Quantum Devil Saga: Avatar Tuner. They tell an alternative story to that of the games that branches from the original as it progresses. They are officially released outside of Japan by Bento Books, translated by Kevin Frane.

Finally, there is a prequel novel called That's Catch-22

, which takes place a number of years before the events of the first game.

From illusion to truth...from darkness to light...from doom to eternity...* Variant of the Pavamana Mantra.