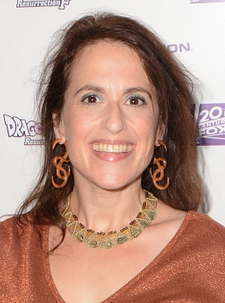 Amanda Beth Winn-Lee (born November 14, 1972) is an American voice actress, writer and ADR director who works mainly on anime dubs. She was the voice of Mimiru in .hack//SIGN, Rally Vincent in Gunsmith Cats, Yohko Mano in Devil Hunter Yohko, Momiji Kushinada in Blue Seed, and was featured most notably as Rei Ayanami of Neon Genesis Evangelion fame. Aside from voice work she has quite often handled production, ADR direction, and the scripting of various projects for her dubbing company Gaijin Productions, LLC.

She can also be heard in the commentary for the Region 1 The End Of Evangelion DVD along with fellow voice actors Taliesin Jaffe and husband/Gaijin co-owner Jason C. Lee (credited as "Jaxon Lee" under the S.A.G. to avoid confusion with the other Jason Lee), whom she married in 1997.

Said commentary has gained a reputation for being somewhat controversial among fans, and to this day (nearly a decade later), she gets hate mail about it. Is it a crime against art, or a rollicking good time? Check out a a few excerpts here

and decide for yourself.

Born in Houston, she began her acting career in 1995 at ADV Films before she moved out to Los Angeles to found Gaijin Productions in the early 2000s.

Expanding on her anime work, Winn-Lee also provided the voice of Konoko, the protagonist of the Bungie Studios video game Oni.

The couple's son Nicholas was born in November 2004, but they soon learned that he had a rare form of infantile leukemia. Amanda later dropped out of anime work to spend most of her time caring for her son (he survived). While she hasn't worked on much anime as of 2021, you can still hear her in video games, especially Atlus titles, such as the PS2 version of Disgaea, Luminous Arc, Digital Devil Saga, Persona 4, Persona 5, and Trauma Team.

Winn-Lee is also (in)famous in some fan circles for antics at various cons in the late 90's, most of them involving alcohol. Despite being best known for voicing Rei, it's amusing to note that she has a lot more in common with Misato Katsuragi. She's famous for being very foul mouthed and also very funny (she's the person in the room most likely to crack an utterly hilarious dirty joke, but one that you dare not repeat in polite company - just listen to her audio commentaries).

She has also wrote The Noodle Chronicles: Everything I know About Cheating Death I Learned From My Kid, a biography based on her experience in looking after her son. All proceeds would fund further anti-leukemia research. She also self-produces a YouTube series giving tips on the best ways to enjoy marijuana, A Mom's Guide to Cannabis.

Not to be confused with Amanda Lee, a Texas-based voice actress.