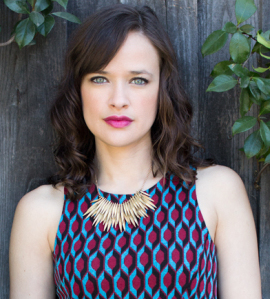 Brina Michelle Palencia (born February 13, 1984) is an American voice actress and ADR Director who works primarily on the properties of Funimation. Brina attended the University of North Texas. Her most well known voice roles are that of Eve in Black Cat, Miharu Rokujo in Nabari no Ou, Kaoru Midou in Moon Phase, Yue Ayase in Negima!, Ai Enma in Hell Girl (first season only) and Holo in Spice and Wolf. She's also known as the voice of Tony Tony Chopper in the Funimation dub of One Piece as well as the voice for Rei Ayanami in Rebuild of Evangelion. To video game fans, she's the voice of Mad Moxxi in the Borderlands games. She also does occasional live-action roles.

Palencia's voice range comes from her extensive voice training and her ability to place her voice differently. She has also been cast in a variety of roles, and performs a lot of songs for FUNimation. Apart from normal female voices, she is skilled in playing younger females and younger males as well. She is a shoe-in for any character who is skilled in acting in-universe, can sing magnificently, or/and when their singing ability becomes a story point... which is becoming more common these days when seiyuus in Japan are actually required to know how to sing. She also made her ADR directing debut in School Rumble. Her brother Gino Palencia also works for FUNimation as an ADR Engineer.

In 2015, she began doing LA roles, most notably Vorona in Durarara!!x2.