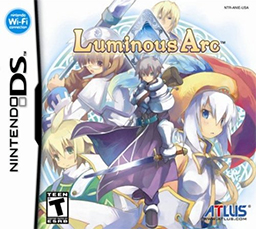 Luminous Arc is a strategy game by Imageepoch, published 2007.
Advertisement:

It's the story of an elite group of children, from Ever Garden, naturally known as the "Garden Children". The children have all been raised by the Luminous Church to fight Monsters and Witches, both of which apparently tried to destroy the world several thousand years ago.

However, one day after the monsters attack, the group meets one of the witches, who doesn't seem too bad. Hence, we begin an enjoyable, if somewhat cliche, trip around the world the uncover the truth about the world, and the teachings of their Church.

The game is notable for having a very good multiplayer mode, even if the single player mode can be sluggish and somewhat predictable.

Also, it has a nice opening.

There is also a sequel of sorts, which involves an entirely new cast: Luminous Arc 2.It has later released two more sequels exclusively in Japan, Luminous Arc 3 and Luminous Arc Infinity.