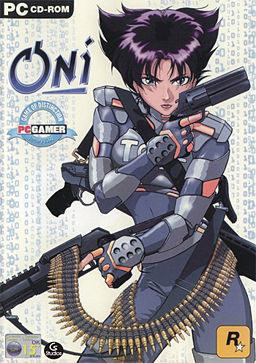 Oni is a 2001 Action Game for the PC and PlayStation 2, developed by Bungie, best-known for later developing Halo and Destiny, and who were under the Gathering of Developers

umbrella at the time.

The year is 2032. the World Coalition Government is in charge of 80% of the world's countries, and its peace-keeping forces — the Technological Crimes Task Force (TCTF) — crack down on everybody who threatens the status quo, while most of the population is centralized around atmospheric processors that keep out the massive pollution outside the cities. The WCG is opposed by a criminal organization known as The Syndicate, led by a man named Muro.

Enter Konoko, a TCTF agent fresh out of training, who is assigned to infiltrate a Syndicate facility and make contact with a mole inside. Helping her through a communication link are her commander, Griffin, her physician, Kerr, and Mission Control android Shinatama. Obviously, not everything is what it looks like...

Drawing inspiration from classic anime, chiefly Shirow Masamune's Ghost in the Shell (going as far as having main characters Konoko and Griffin be expies of Motoko Kusanagi and Daisuke Aramaki), Oni is an Action Game with a mix of firefights and hand-to-hand combat.

The game has a small but dedicated modding community.

Their main project is the Anniversary Edition mod, which fixes a lot of the game's Artificial Stupidity and adds back in cut features. Mac

For "the Japanese demon", see Oni.