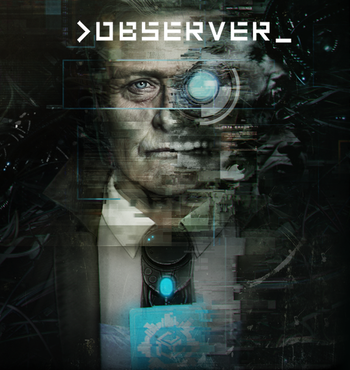 Observer (stylized as >OBSERVER_) is a Cyberpunk thriller/horror game, developed by Bloober Team of Layers of Fear fame and published by Aspyr. The game released for PC, PlayStation 4 and Xbox One on 15 August 2017.
Advertisement:

Takes place in 2084 Poland, where after a "digital plague" known as the Nanophage and a resulting war, what remains of the country is controlled by the Chiron corporation. The player takes control of Daniel Lazarski, a special police agent known as an Observer, who has augments that allow him to go into a person's mind and relive their memories. After getting an ominous call concerning his estranged son Adam, he investigates a seedy apartment complex under lockdown because of a suspected resurgence of the Nanophage. What he finds there is a string of dead bodies and the implication that something more nefarious is at work.