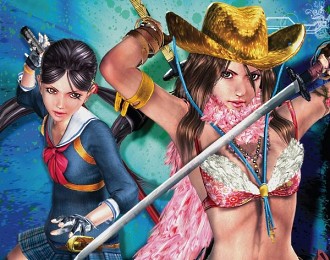 All this, and you get to fight zombies!
Advertisement:

Onechanbara is a series of third-person Hack and Slash games developed by Tamsoft, originally appearing as part of Simple Series budget game line released only in Japan and Europe. The games involve a team of sisters, Aya and Saki, who are among the few survivors of a zombie outbreak. Complicating matters, both sisters suffer from a curse known as "Baneful Blood", which drives them crazy when they come in contact with the zombies' blood. They have vowed to use everything in their power to drive back the zombies so that they can once again live in peace.

The fifth main game, Onechanbara Z ~ Kagura ~ , was released in Japan on January 19, 2012 for Xbox 360. Instead of Aya and Saki, the game stars a pair of vampire sisters named Kagura and Saaya. Unlike its predecessors, Z wasn't a budget game and its marketing has been rather big. However, due to its Xbox-exclusivity, it failed to attract a wide audience (Not that it was making any pretense to do so...).The game had an Updated Re-release for PS3 on October 24, 2013, featuring NoNoNo, a character from D3Publisher's other franchise: the Dream Club series. One year later, a PS4-exclusive sequel, Onechanbara Z2: Chaos, was released on October 10, 2014 in Japan and July 21, 2015 in the United States. The game was later released on PC through Steam.

In September 2018, Onechanbara: Origin was announced for a 2019 release in Japan exclusively for the PS4, with a western release confirmed for October 14th in 2020. It is a remake/reimagining of the original PS2 games, fusing the two titles into one and adding new features.

The Onechanbara games use the following tropes: