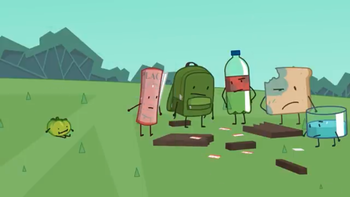 ONEnote Acronym undisclosed is yet another Object Show created by Cheesy Hfj (the same guy who made the joke show called Battle for Circle) that premiered on June 11th, 2020 and ended on August 21, 2022. It has a group of objects competing for the chance of a wish for anything their heart desires.

However, things get complicated because this isn't a typical contest: the objects came from different parallel universes. All contestants have been suddenly and forcibly teleported to the Plane (a non-descriptive grass field which spreads vastly over god-knows-where) by Airy, an invisible host lackluster in both personality and ideas, in order to compete against their will in his ill-prepared, simple competition.

ONE is best described as a full-on Genre Deconstruction of the typical Object Show format. Throughout its two seasons, both inside and outside the competition, it explores conventions such as simple names, featureless planes, easy reincarnations, and the Planet of Hats that gives rise to objects with human personalities - as well as how those personalities fall apart over the course of a manufactured game show.

The show originally started out with an economy-sized cast of six before Airy keep adding more and more contestants every episode until there are 18 players as of current. note For the sake of simplicity, the contestants that debuted in episode one, those debuted in episode two, and those in episode 3 are collectively called the first batch, second batch and third batch of contestants respectively