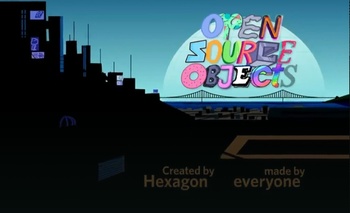 A show everyone can work on!
Advertisement:

Open Source Objects (OSO for short) is an ongoing animated YouTube series that released its first episode on April 5th, 2019. The primary selling point and what makes this Object Show unique is that the entire thing is open source, meaning that almost anyone can contribute to its production by joining its Discord, then signing up as a writer, animator, storyboard artist, audio engineer, and so-on.

Off the coast of a large metropolis stands The Dome, where a competition show takes place inside it. While the prize is undefined, the show has 32 contestants and is hosted by Crayon Box, assisted by her co-hosts Blue Crayon, Green Crayon, Red Crayon, and Yellow Crayon.

Every episode, a challenge is introduced for the contestants to overcome. A small fraction of contestants who fail the challenge are put up for elimination at the end of the episode, whereas viewers of the show can vote for who they want to be eliminated.

A non-canon Spin-Off called OSO According To VC (OSOATVC for short) was released on May 24, 2020, featuring cruder animation and a nonsensical story. Its episodes can be found here.