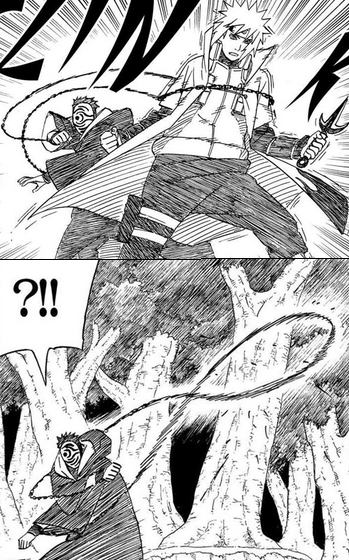 One of [the dark priests] tapped the floor with the back of his staff. All four of them disappeared, along with a bowl-shaped section of the floor they had been standing on.
"Darn it! Where did they go?" Ami wondered.
— Dungeon Keeper Ami: "Backfire - Part 2"

Teleportation is usually flashy, with bright lights and vacuum booms, but, sometimes, it's silent and invisible, only noticeable if the teleported object appears or disappears suddenly.

It's rare in visual media, as the audience wouldn't know that anything happened beyond something disappearing, without other clues, and when written out, the teleportation is usually described as disappearing, with the implication that it was instantaneous.

It's the kind of power that gives a massive edge in combat and theft, sneaking into enemies' blindspots, or avoiding them altogether. The Opposite Trope to Flashy Teleportation, for when teleportation is noticeable, even if you're not looking directly at it.

Offscreen Teleportation is a Sub-Trope, in that what happens looks like this trope, but otherwise is not explained In-Universe as a teleportation power.

Can be used to perform Stealth Hi/Bye where the character suddenly appears or disappears to start or end a conversation, respectively.