Music / Hail to the Thief 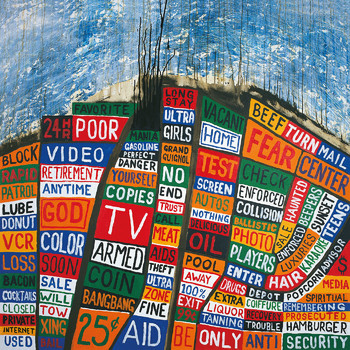 "Just 'cause you feel it doesn't mean it's there."

This album is not to be confused with the trope titled Hail to the Thief.

"Are you such a dreamer
To put the world to rights?
I'll stay home forever
Where two and two always makes a five"
— "2 + 2 = 5 (The Lukewarm)"
Advertisement:

Hail to the Thief (also labelled as Hail to the Thief, (or, The Gloaming.) in the album booklet)note The band considered The Gloaming as the main album title for awhile, but ultimately decided it sounded "too prog rock" and selected a line from "2 + 2 = 5" instead is the sixth album by English Alternative Rock band Radiohead, released in 2003.

With the album, the band combined the experimental elements heavily present on their previous two albums Kid A and Amnesiac with the live instrumentation of their more well-known guitar-led sound, relying as little as possible on digital manipulation. Rather than record and then remix everything, electronic instruments (synthesizers, drum machines, etc.) were played live in the studio along with the "rock" instruments for a looser and more organic performance. With fourteen tracks adding together for almost an hour of music, it's the band's longest output yet.

It's also the band's most overtly political effort, as the album's title was a phrase used by anti-George W. Bush protesters during the controversy following the 2000 presidential electionnote though it was first used to protest the equally contested election of Benjamin Harrison, who like Bush lost the popular vote but won the electoral vote following a compromised election and was met with demands for recounts, and the theme of political futility and restriction is explored throughout the album. Word of God, though, states that the album wasn't specifically intended as an attack on Bush and was more about the rise of the far-right in western politics in general.

The album was a major commercial success, topping the charts in the UK, Canada, France, Ireland, and Scotland, as well as topping Belgium's Ultratop Wallonia chart and peaking at No. 3 on the Billboard 200. It would go on to become the 58th and 83rd best-selling album of 2003 in the UK and the US, respectively, and would be certified platinum in the UK, the EU, and Canada, as well as gold in the US, Australia, Belgium, France, Japan, New Zealand, and Switzerland.

Hail to the Thief was supported by three singles: "There, There", "Go to Sleep", and "2 + 2 = 5". Just under a year after HTTT came out, an EP called COM LAG (2plus2isfive) was released to support the album, containing the three singles' various B-sides plus some remixes.