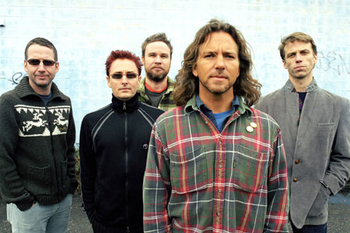 L-R: Stone, Mike, Jeff, Eddie, and Matt.
"And he still gives his love, he just gives it away
The love he receives is the love that is saved
And sometimes is seen a strange spot in the sky
A human being that was given to fly"
— "Given To Fly"
Advertisement:

Pearl Jam is a popular American rock band formed in 1990 in Seattle, which enabled the band to become one of the "great four" of Grunge, alongside Nirvana, Alice in Chains and Soundgarden. The band formed out of the ashes of local Seattle band Mother Love Bone, whose singer Andrew Wood died of a heroin overdose in 1990. Bassist Jeff Ament and guitarist Stone Gossard began writing songs together, and eventually guitarist Mike McCready joined them. Looking for a singer and a drummer, they recorded a demo tape and gave it to former Red Hot Chili Peppers drummer Jack Irons, who declined the invitation but passed the tape onto his friend, San Diego surfer Eddie Vedder. Vedder was impressed by the tape, recorded his own vocals for a few of the songs and sent it back to Stone, Jeff, and Mike. Within a week, Vedder was hired, and flew up to Seattle to join the band.

The rest is rock history; their first album, Ten, sold over 13 million copies, with the singles "Alive" and "Jeremy" becoming massively successful. Vs., the second, reached #1 on the charts the week it came out, outselling the other nine albums on the top 10 combined. This led to some backlash from purist Seattle rock groups, especially Kurt Cobain of Nirvana, who even alleged that the band had sold out to the mainstream. This led to Creator Backlash from Vedder, who decided to erase any pretense of commercialism from the band's music, which led to some tension between the band members; they had a Spinal Tap-esque Revolving Door Band of drummers around this time due to internal differences before eventually settling on Matt Cameron of the aforementioned Soundgarden. The four core members have nevertheless remained intact since the band's inception. note As of 2006 Cameron has drummed in the group longer than all of his predecessors combined, and as of 2019 he's been drumming in Pearl Jam longer than he ever did for Soundgarden.

Since then, the band has rebelled against their fame and stardom, first by boycotting and later suing the mega-corporation Ticketmaster, which would raise consumer ticket prices at band shows. Because of the boycott and lawsuit, the pool of venues available to the band for touring at the time shrunk drastically, much to the chagrin of their audience. Pearl Jam then decided to move away from their Arena Rock roots (for the most part) to more experimental sounds in Alternative Rock on later albums Vitalogy, No Code, and Yield. While not commercially well-received, Pearl Jam's material through the mid- to late-'90s was critically lauded before the band hit a period of stagnation at the Turn of the Millennium.note Though not for lack of good ideas. McCready was struggling with addiction as Vedder went through a divorce, and a tragic incident at the Roskilde Festival in Denmark left nine fans of the band trampled to death, leading some in the band to consider quitting music for good.

They have since made a return to their hard rock origins with their Self-Titled Album, released in 2006note Known to some as the "Avocado Album". Their following two albums, Backspacer (2009) and Lightning Bolt (2013), were domestically distributed through Pearl Jam's own label, Monkeywrench Records, with Lightning Bolt briefly holding the record as the best selling vinyl release in North America. Pearl Jam continues to tour constantly to give fans an opportunity to see them live.

both to discourage piracy and also to reward completionist collectors with superior quality live recordings.