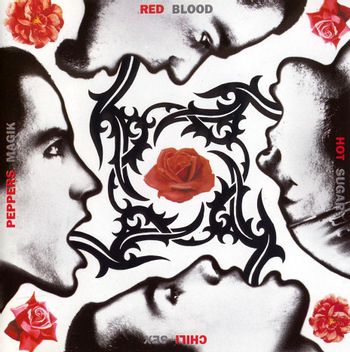 Step into a heaven where I keep it on the soulside
Girl please me, be my soul bridenote Clockwise, from left: Anthony Kiedis, Flea, Chad Smith and John Frusciante
Sometimes I feel like I don't have a partner
Sometimes I feel like my only friend
Is the city I live in, the City of Angels
Lonely as I am, together we cry

I drive on her streets cause she's my companion
I walk through her hills cause she knows who I am
She sees my good deeds and she kisses me windy
I never worry, now that is a lie.
—"Under the Bridge"
Advertisement:

It was the band's breakout album, propelling the four members to widespread success thanks to the singles "Under the Bridge" and "Give It Away", both of which are considered to be the band's signature songs. The album represents a fusion of the band's funkier, sex-filled elements along with a new, more melodic style that the band continued all the way from 1999's Californication onward. In addition, the album is notable for each song fading into the next one, making it the only Chili Peppers album (so far) do so.

It was the first Chili Peppers album produced by the legendary Rick Rubin, who remained their producer until 2011, after the release of their tenth album I'm With You. Commercially, it was a smash hit, going seven-times Platinum in the United States, triple-Platinum in the United Kingdom, and selling 13 million copies worldwide. Along with Nirvana's Nevermind (which was released on the same day, to boot!) and R.E.M.'s Out of Time, it is credited with bringing Alternative Rock to the mainstream. The band would cameo on The Simpsons episode "Krusty Gets Cancelled", and appear on Saturday Night Live.

"Under the Bridge" would hit #2 on the Billboard Hot 100, the band's best performer on the Hot 100 to this day, while "Give it Away" would top the Billboard US Alternative chart; both would also be Top 20 hits in the UK. Two more singles, "Suck My Kiss" and "Breaking the Girl", would also be Top 20 hits on the US Alternative chart. The song "Soul to Squeeze", which was recorded during the album sessions but not featured on the album (it was initially included as a B-Side on the lead singles), was released as a single in 1993 after being featured on the Coneheads soundtrack, and became a surprise Top 40 hit in the US.

While Kiedis, Flea, and Smith enjoyed their new-found success, guitarist John Frusciante (21 years old at the time, eight years younger than the rest of the members) felt ostracised due to the constant pressures to perform better. He hated performing live and began sabotaging some of their performances, using hard drugs, and drifting apart from the rest of the members. He left the band mid-tour in early 1992 (causing almost all of their Japanese tour dates to get cancelled), forcing the band to consider numerous guitarists before settling on Jane's Addiction guitarist Dave Navarro. Frusciante later returned to the band in 1998 for the release of Californication.

A documentary called Funky Monks showing the band working on the album in The Mansion, a recording studio now owned by Rick Rubin, was released. The avant-garde music video for "Give It Away" won a couple of MTV video awards, and even beat out Nirvana's "Smells Like Teen Spirit" for the Grammy Award for Best Hard Rock Performance in 1993.

What I trope, you've got to get it put it in you: