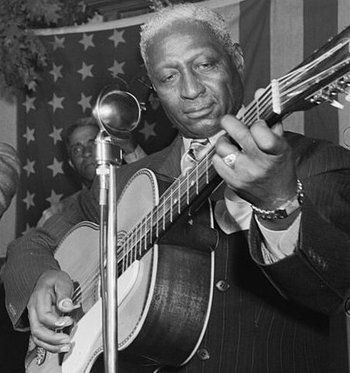 Huddie William Ledbetter (January 20, 1888 – December 6, 1949) was an American folk and blues musician known for his vocals and his style of 12 string guitar playing (he titled himself as the King of the Twelve String Guitar). He also introduced several folk standards to the general American public through his recordings. There are a number of conflicting stories on where he got his nickname such as being a pronunciation of his family name in a southern accent, a buckshot wound or his ability to drink moonshine.

Lead Belly had already become a musician by 1903, performing at red light districts at St Paul's bottoms in Shreveport, Louisiana. By his early 20s, he left home to make a living as a guitarist and occasional laborer. However, in 1915, he was convicted of carrying a pistol and was sentenced to serve time on the Harrison County Chain Gang. He escaped, but was convicted again after killing a relative over a woman. He was pardoned after serving the minimum sentence for the crime and performing for the Governor. He was once again imprisoned in 1930 at Louisiana’s Angola Prison Farm for attempted murder. 3 years into his sentence, he met folklorists John and Alan Lomax, who were recording folk music for the Library of Congress. Impressed by Lead Belly's performances, they recorded hundreds of his songs. Lead Belly was released from the prison in 1934.

He worked as a driver for John Lomax, due to lack of jobs at the time; Lomax helped secure gigs for Lead Belly, including a feature in one of Time Magazine's "March of Time" newsreels. He then recorded for the American Record Corporation, though they sold poorly for only releasing blues records rather than his better known folk songs. Touring also became hard to materialize. John Lomax ended his partnership with Lead Belly in a rather bitter falling out. Lead Belly did manage to gain success by performing for leftist folk music aficionados.

Lead Belly was once again back in jail in 1939 for assault, though Alan Lomax helped cover his legal expenses. Following the trial, Lead Belly became a regular on Alan's CBS radio show "Back Where I Come From" which was broadcast nationwide. He also recorded for RCA, the Library of Congress and Capitol Records. He also became the first American country blues musician to gain success in Europe. By 1949, he even had his own regular radio show called "Folk Songs of America". He fell ill before completing his first European tour, being diagnosed with ALS and dying that year.

Lead Belly's work has been covered by several popular artists. He was also the subject of a 1976 biopic. A compilation of his works (Lead Belly's Last Sessions Vol. 1) was listed by Kurt Cobain as amongst the 50 most influential on Nirvana's sound. Cobain would cover "In the Pines" under the name "Where Did You Sleep Last Night?" during Nirvana's MTV Unplugged performance. He was inducted in the Rock and Roll Hall of Fame in 1988 and the Louisiana Music Hall of Fame in 2008.