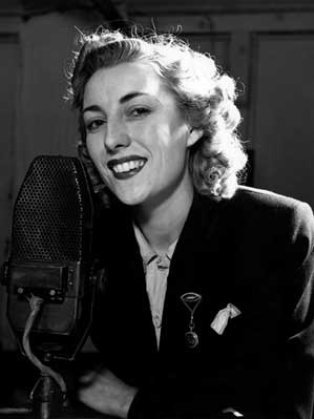 Known as "The Forces' Sweetheart", she hosted a radio programme, Sincerely Yours, during World War II, and songs like "There'll Always Be An England" and "The White Cliffs of Dover" still evoke The Home Front all over the world. Her hopeful, yearning ballads perfectly captured the spirit of the boys overseas, and she became a symbol of what those lonely men on the fronts were fighting for. She did extensive tours to entertain and comfort soldiers on several of said fronts, no matter how remote they were from Britain (she went as far as Burma).

She starred in three musical films, One Exciting Night, Rhythm Serenade and We'll Meet Again — the latter being named after what's probably her best known song (which was somehow used to score a nuclear apocalypse). She announced her retirement just months after the end of the war, but eventually returned to music and topped the charts multiple times during subsequent decades. When she passed away at age 103 on June 18, 2020, she was one of the last living wartime legends.

She is familiar to many rock fans from Pink Floyd's classic Rock Opera, The Wall, with the song "Vera" "Anybody here remember Vera Lynn?..." and the line "What has become of you?". Well, it turned out Vera was still a recording artist at that time (she retired five years after The Wall was released) and in 2009, four years after Pink Floyd's very last gasp at Live 8, a compilation album made her the oldest living artist ever to chart at #1. In short, she outlasted Pink Floyd.