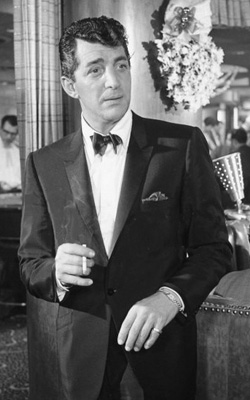 You wish you were that cool.
Advertisement:

Dean Martin (June 7, 1917 — December 25, 1995; born Dino Paul Crocetti) was an American singer, actor, comedian, vice-president of the Rat Pack, and the epitome of cool. He didn't have to invoke the rule; he was just cool.

He was a non-descript singer with a pretty good East Coast reputation until 1946, when he met and teamed up with Jerry Lewis. They would become the hottest comedy team in America over the next ten yearsnote How hot? Fans were so eager to meet them that it was impossible to clear out clubs and theaters after performances. In order to get the audiences to leave, Martin and Lewis would go to an upstairs window and toss out autographed cards to the screaming crowd and would occasionally perform impromptu skits to fans' delight and first achieved movie success with supporting roles on My Friend Irma (1949) and its sequel My Friend Irma Goes West (1950). Popular belief was that Lewis was the better talent and that he carried Martin, but Lewis consistently praised Martin's work and said the team was "50-50".

The team broke up because Martin felt he was being upstaged by Lewisnote Lewis would feign stomach pains to get attention and rewrite scripts so that his solo routines (that he would try and play for pathos) would get more screen time than Martin's musical numbers and because he wanted to do some serious acting. No one thought much of his chances, but he quickly knocked out three impressive performances: The Young Lions (1957), Some Came Running (1958), and Rio Bravo (1959). He then followed those up with the memorable Ocean's 11 in 1960.

He even headlined his own series of spy films based on the Matt Helm novels by Douglas Hamilton. Although the books were very hard-edged thrillers, the films took a considerably lighter tone by being one of the earliest spoofs of James Bond films. Although these films aren't very well-known today, they served as inspirations for Austin Powers.

All the while he was acting, he was also recording. Once he settled on his trademark "crooning" style, he became one of the most beloved singers in America. "Ain't That a Kick in the Head", which Dino first performed in the original Ocean's 11, is today the emblematic song of the Rat Pack period. (Want proof? It was used in a Budweiser Super Bowl commercial.) He's also well known for "That's Amore", "Everybody Loves Somebody", ''Memories are Made of This", and "Volare (Nel blu di pinto di blu)".

During the Rat Pack years and subsequently, Dino was rarely seen without a lowball glass (his Vanity License Plate read "DRUNKY"). Most (but not all) of the time though, he was drinking apple juice. Likewise, while his best friend, Frank Sinatra, caroused and tomcatted, Dino went home every night to his wife, Jeanne. When they divorced in 1973, she said simply, "He was home every night."

Most tropers of a certain age know him as the host of the Dean Martin Show (NBC, 1965-1974) and the Dean Martin Celebrity Roasts (also NBC, 1975-1984). He didn't want to do the show at first, and presented NBC with a ridiculous list of demands (including a huge salary and a clause that prohibited retakes) in the hopes that it would scuttle the deal. But when NBC agreed to every single demand, he felt he had no choice but to do it.

It says above that Dino died in 1995, but he really died on March 21, 1987, when his son Dean Paul (who had done a little singing and acting himself) was killed when his California Air National Guard jet crashed. Dino was never the same. Sinatra tried to coax him back on the road — the "Together Again Tour", 30 shows in 40 days. Dino, who always preferred working in smaller clubs, felt lost in the big stadiums Frank insisted on playing and only hung in for one week before going home. In 1993, the lifelong smoker was diagnosed with lung cancer and made few public appearances afterward. Jeanne was at his side till the end.

He is the subject of one of the greatest of showbiz biographies, Dino: Living High in the Dirty Business of Dreams by Nick Tosches.