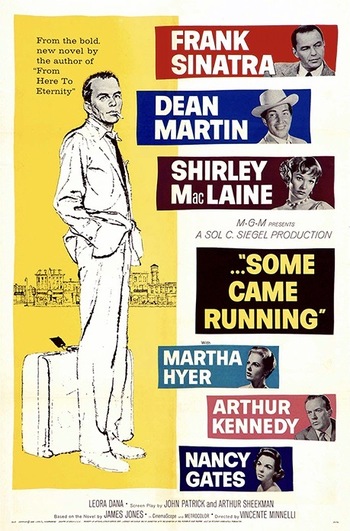 Dave Hirsh (Sinatra) is an alcoholic soldier, freshly discharged from the Army. He once had a career as an author, and published two books, but drinking and writer's block have left his writing career moribund. He drinks too much one night and wakes up the next morning in a bus that has just arrived in his hometown of Parkman, Indiana, where he is making his first visit in sixteen years. With Dave is Ginny Moorehead (MacLaine), a dim-witted but attractive and affectionate girl who has accompanied him to Parkman because she likes him and also because she is trying to escape her ex-boyfriend Ray, a mobster creep who has been stalking her. Dave tries to put Ginny on a bus back to Chicago, but she sticks around.

Dave rather unwillingly meets with his older brother Frank (Kennedy), who married into wealth and now owns a prosperous jewelry shop. Dave and Frank don't particularly like each other; Dave is bitter that his older brother sent him away to a boarding school when Dave was 12, and Frank, who is cultivating the social elite in provincial Parkman, regards his brother as a social embarrassment. Frank for his part is stuck in an unhappy marriage to cold, bitter Agnes.

Frank tries to make amends with Dave for appearances' sake, but Dave isn't very interested. Nor is he interested in the adoring Ginny, who keeps hanging around. He is however very interested in gorgeous Gwen (Hyer), who admires him as an author and wants to get his career going again. Dave has another admirer in genial gambler Bama Dillert (Martin), who wants Dave, a skilled poker player, to join him in the professional gambling circuit.

Based on a novel by James Jones, who had a previous bestseller with From Here to Eternity, which was also made into a movie starring Frank Sinatra. Elmer Bernstein composed the music.