Film / Sons of the Desert 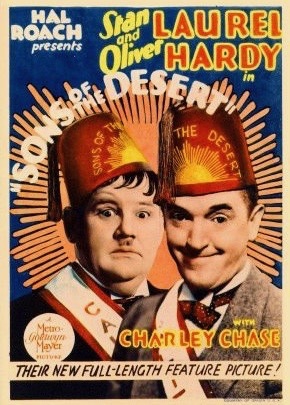 Sons of the Desert is a 1933 comedy film starring Stan Laurel and Oliver Hardy, produced by Hal Roach and directed by William A. Seiter.

Stan and Ollie are neighbors and fellow members of the "Sons of the Desert" society. They very much want to go to the society's national convention in Chicago, but Ollie's wife, Lottie, has a previously scheduled vacation in the mountains and categorically refuses to let Ollie go. Stan and Ollie conduct a wacky scheme in which Ollie fakes an illness and convinces his wife that he needs a health cruise to Hawaii. It works, and the boys attend the convention—but they have difficulties on the way home.

Charley Chase, a fellow veteran of Roach-produced short comedies going back to the silent days, has a supporting role as an obnoxious conventioneer.