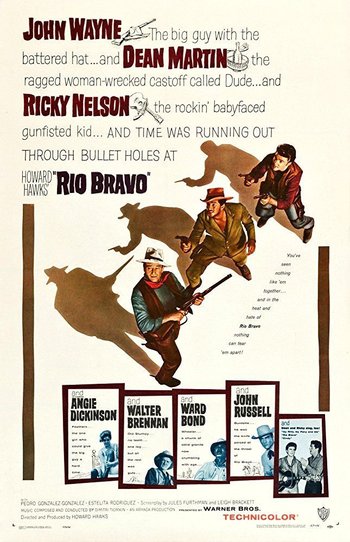 Pat Wheeler: A game-legged old man and a drunk. That's all you got?
John T. Chance: [shrugs] That's...what I got.
Advertisement:

In 1952, Fred Zinneman directed High Noon, an excellent Western that snagged a number of Academy Awards — but that didn't keep Western legends John Wayne and Howard Hawks from thinking the idea of a sheriff running around town and begging people to help him face a couple of outlaws looked awfully unprofessional. (As Hawks explained to the French magazine Cahiers du Cinéma, he didn't like the idea, especially since High Noon's sheriff eventually proved a little luck — and some help from his bride — made him perfectly capable of doing his job alone.) So in 1959, the duo made Rio Bravo.

Hawks and his collaborators (the screenplay was written by Jules Furthman and Leigh Brackett) switched the story of High Noon to a professional's point of view: if people offered John Wayne their help, he would reply, "If they're really good, I'll take them. If not, they'll only cause me more trouble." Hawks' idea saw Wayne's sheriff take the opposite route of High Noon's sheriff in every critical decision and position from High Noon while remaining successful in his task.

John T. Chance works as the sheriff of a small Texas town, but he's not as fast as he used to be with a six shooter (he prefers the trademark John Wayne Winchester '92 instead) — and to add to his problems, the brother of the local rancher who pretty much runs the town sits in his jail. The rancher sends plenty of hired guns to get his brother out of jail, and the only people Chance can count on for help include his old, crippled deputy, Stumpy, and a washed-up drunk called Dude (or Borrachón, Spanish for ''drunkard", by the Mexicans). Along the way, Chance also receives help from a youngster named Colorado Ryan — but will his help be enough to help the other three men deal with the hired guns until the Marshal arrives to handle the rancher's brother?

On record as being one of the all-time favorite films of Quentin Tarantinonote  who famously promoted it it as his date movie of choice.

Two later films that Hawks and Wayne made together, El Dorado and Rio Lobo are loose remakes of the same premise. Meaning Hawks and Wayne disliked High Noon so much they remade it three times.

John Carpenter remade this film in 1976 as Assault on Precinct 13 by placing the story into a contemporary setting. (Precinct 13 ended up being remade in 2005.)

Jumpin’ Jehoshaphat! Why don’t nobody never tell me nothin’?!