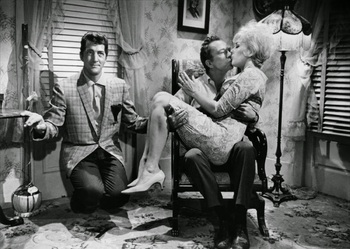 Kiss Me, Stupid is a 1964 Sex Comedy directed by Billy Wilder, who also wrote the screenplay along with I. A. L. Diamond. It's an Americanized version of Anna Bonacci's 1944 Italian play L'ora della fantasia (The Dazzling Hour), which was also adapted into a 1952 Italian film, Moglie per una notte (Wife for a Night).

Orville J. Spooner (Ray Walston) is a church organist and music teacher in the small desert town of Climax, Nevada. He's married to the pretty Zelda (Felicia Farr) but is insanely jealous and suspects her of cheating behind his back. He also writes songs with gas station owner Barney Millsap (Cliff Osmond), though they've had no luck in getting any famous singers to perform the likes of "I'm a Poached Egg" or "I Left My Heart in San Diego".

A highway detour forces popular crooner Dino (Dean Martin) to stop for gas in Climax on his way from Vegas to Hollywood. Sensing a golden opportunity to pitch their songs, Barney practices Vehicular Sabotage on Dino's car, forcing him to spend the night at Orville's house. Once it becomes apparent that the amorous Dino expects to have a tryst with Zelda (who he hasn't met yet), Orville and Barney (but mainly Barney) cook up a scheme where Zelda is forced to leave the house and sexy cocktail waitress/prostitute Polly the Pistol (Kim Novak) poses as Orville's wife.

Very controversial in its day, sold as "Adults Only", and getting a Condemned rating from the Catholic Legion of Decency in the process. It's now considered an interesting curio in Wilder's later career.

Mel Blanc, far better known as the voice of almost all the characters in the Looney Tunes canon, has a rare live-action film role as Dr. Sheldrake the dentist.