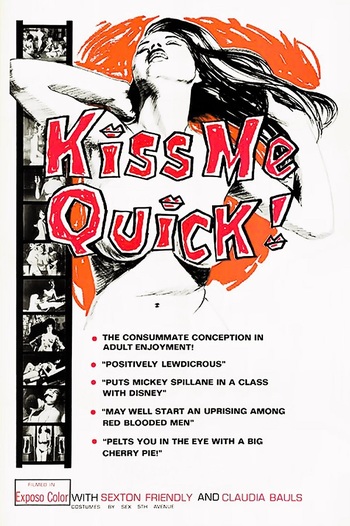 Kiss Me Quick! is a 1964 American film directed by Peter Perry. The film was originally titled Dr Breedlove or Dr Breedlove or How I Stopped Worrying and Love to exploit the title of Stanley Kubrick's Dr. Strangelove. It was retitled to exploit Billy Wilder's Kiss Me, Stupid.

The plot involves an alien, Sterilox, from the "Buttless" galaxy being sent to Earth in order to find the perfect woman who will be used to create a race of servants. Sterilox is teleported into the lab of a mad scientist by the name of Dr. Breedlove, who offers Sterilox a number of beautiful women to choose from. The highlight of the movie involves a dance number where three of Breedlove's women gyrate to rock music.