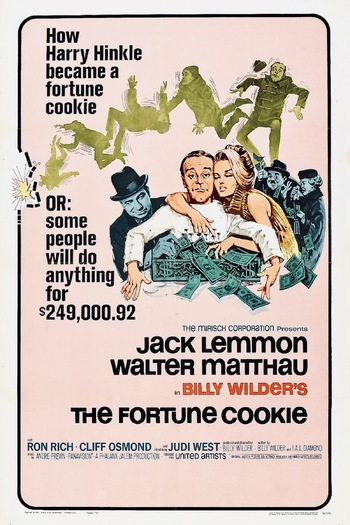 The Fortune Cookie is a 1966 Black Comedy film directed by Billy Wilder, starring Jack Lemmon and Walter Matthau in their first of ten screen pairings.

CBS cameraman Harry Hinkle (Lemmon) is injured when Cleveland Browns player Luther "Boom Boom" Jackson (Ron Rich) collides with him during a game. Harry's injuries are slight, but his brother-in-law, fast-talking attorney "Whiplash Willie" Gingrich (Matthau), sees the chance for a big insurance payment if Harry exaggerates them. What follows next is a comedy of deception mixed with the drama of remorse, as Harry sees the affects of the con on the guilt-ridden player. Meanwhile, the insurance company—convinced that something devious is afoot—hires private detective Chester Purkey (Cliff Osmond) to keep Harry under surveillance.