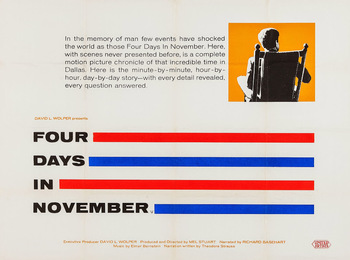 Four Days in November is a 1964 documentary feature film directed by Mel Stuart, about the assassination of John F. Kennedy in November 1963—the first of many such documentaries.

The film takes a straightforward narrative approach, beginning with Kennedy taking a trip to Dallas to help shore up fractures within in the Texas Democratic Party in advance of his 1964 re-election campaign (Gov. John Connally, shot along with the President, eventually became a Republican). Other threads follow Lee Harvey Oswald, a frustrated young Marxist who decides to commit a terrible crime, and Jack Ruby, a strip club owner and police department groupie who commits a crime of his own.

Contains many of the standard clips one associates with the Kennedy assassination, as well as some more obscure one, such as an interview with the cabbie who drove Oswald to his boarding house on Nov. 22. Does not include the infamous Zapruder Film, which was not shown to the public until it aired on television in 1975.