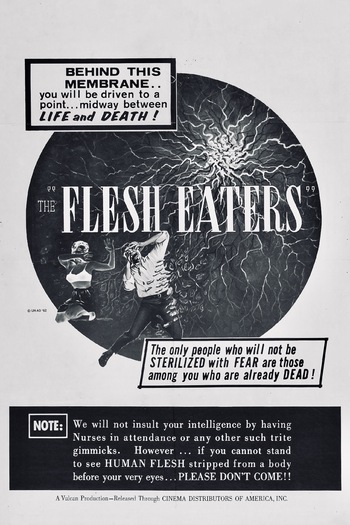 The Flesh Eaters is a 1964 American low-budget Sci-Fi Horror film written by Arnold Drake and directed by Jack Curtis.

An actress, her assistant and their pilot are stranded on a deserted New England island by a storm. However, it turns out not to be so deserted after all. You see, a Mad Scientist has been conducting experiments there to make flesh-eating creatures and sell them as biological weapons. And the creatures have gotten loose...

This film is best known for being one of the first splatter films and for inspiring George A. Romero to make Night of the Living Dead (1968).