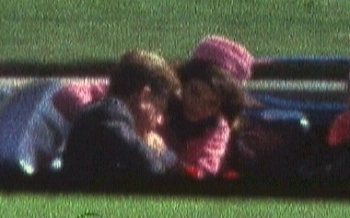 A tale of pink hats and Pink Mist.
Advertisement:

One of the most famous and most important home movies ever made.

In 1963 Abraham Zapruder was a 58-year-old Dallas resident who owned a downtown clothing business. Upon hearing that the motorcade of President John F. Kennedy and First Lady Jackie Kennedy was going to pass close by his place of work, Zapruder took his 8-mm Bell & Howell Zoomatic home movie camera and went to Dealey Plaza to film the motorcade. Zapruder stood atop a concrete column on the north side of Elm Street, with his receptionist Marilyn Sitzman standing behind him to steady him. He took 26.6 seconds of footage over 486 frames. The film opens with a brief shot of police motorcycles, after which Zapruder stopped filming, realizing that the presidential car hadn't yet arrived. The footage then picks up with the presidential car after it turned on to Elm Street, then shows the reactions of Kennedy and Governor John Connally after the car passes from behind a freeway sign, then shows in graphic detail — at Frame 313 — the head shot that killed Kennedy as the car passed directly in front of Zapruder. Zapruder kept filming until the car went under the triple overpass to his right.

In the aftermath of the shooting, Zapruder came into contact with Secret Service agent Forrest Sorrels. After Sorrels promised Zapruder that the film would only be used for an official investigation, the two men searched for a facility to develop the film. They went to the studios of Dallas television station WFAA. The station's staff tried to develop the film, but they didn't have the proper equipment. While he waited, the station had Zapruder go to the newsroom where he was interviewed live on-air

. A local industrial film company eventually developed the negative and made three additional copies on the night of November 22nd. Sorrels sent two of the copies off to Washington, and Zapruder kept the negative, which left one additional copy that became the subject of a furious bidding war over the next few hours, with CBS and LIFE Magazine as the main parties. Dan Rather, then the CBS Dallas bureau chief, was in the middle of all this, and an oft-repeated story claims that he was half-seriously told to go to Zapruder's house, punch him out, and steal the film (Rather has since denied this). Eventually LIFE paid Zapruder $150,000 (over a million dollars in today's money) for the copy. However, Frame 313, which depicts the moment Kennedy is fatally shot, is not present in this version. This was due to Zapruder having a nightmare where, while in Times Square in New York City, he saw a video booth with the sign reading, "See the President’s Head Explode!"

LIFE published some still frames from the film a week after the assassination, and drawings based on the film were included in the 1967 book Six Seconds in Dallas, but the film was not shown for the American public until it was aired on ABC in 1975. It is now widely available on the Internet in various formats—digitally cleaned up versions, versions centering on the occupants of the car in close-up, and frame-by-frame presentations (see here

Home movies taken by observers Marie Muchmore, Orville Nix, and Charles Bronson (not the actor) depict the fatal headshot, but none with as much clarity or nearly as close as the Zapruder film (Zapruder was standing around 25 yards away from the limo). The Zapruder Film was inducted in the National Film Registry with the class of 1994, and has since entered the Public Domain. It's been famously shown in films about the Kennedy assassination, for instance JFK which claims it shows evidence for a second shooter (along with many theorists-some also claim the version available is edited).