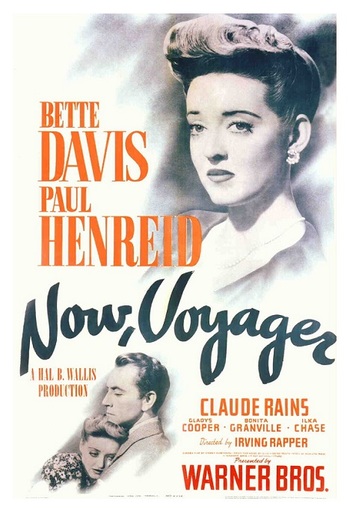 An Academy Award-winning 1942 film directed by Irving Rapper, starring Bette Davis, Paul Henreid, and Claude Rains. A romantic weepie, Now, Voyager is probably a perfect example of the "woman's film" of the '40s.

The story centers around Charlotte Vale (Davis), a repressed Boston spinster whose tyrannical mother (Gladys Cooper) has driven her to the edge of a nervous breakdown. Lisa, Charlotte's well-intentioned sister-in-law, feels something must be done. Enter the renowned Dr. Jaquith (Rains), who takes her to his sanitarium to begin her transformation. Part of her healing involves a South American cruise, where she meets the charming Jerry (Henreid)...

This classic Hollywood melodrama was well-received at the time and is seen as one of Davis' definitive films. The scene where Jerry lights two cigarettes and hands one to Charlotte became famous as a subtle way of implying an intimate relationship. The three stars reunited later for Deception.