Film / The House I Live In 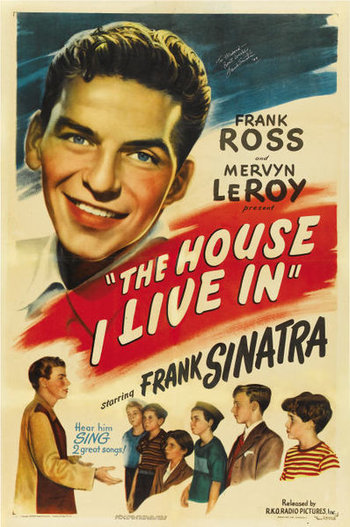 The House I Live In is a 1945 short film starring Frank Sinatra, directed by (an uncredited) Mervyn LeRoy.

Sinatra, playing himself, is recording a song in a studio. Frank steps out into the alley to take a cigarette break, only to find a gang of kids chasing one kid, apparently to give him a beating. When Frank asks what the boy had done, the other kids say they don't like him because of his religion—he's Jewish. Frank tells the kids that they are acting like Nazis. When one kid says his dad was wounded fighting the Nazis, Frank points out that the Jewish kid's parents donated blood. Then Frank tells the story of a Presbyterian pilot and Jewish bombardier who dropped a bomb on a Japanese submarine. Then Frank sings the song "The House I Live In", an ode to America as a land of racial and ethnic tolerance.