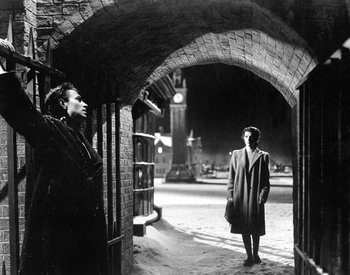 Odd Man Out is a 1947 film directed by Carol Reed and starring James Mason in his Star-Making Role.

It takes place over a single afternoon and evening in an unnamed city in Northern Ireland that is obviously Belfast. Johnny McQueen (Mason) is the leader of a cell in an unnamed "illegal organization" that is obviously the Irish Republican Army. As the film opens, Johnny and his gang are planning to rob the safe of a local textile mill, seeking cash to fund operations and provide for the dependents of IRA members. The only problem is, the rest of the gang is worried about Johnny's leadership. Johnny was in prison for six months and then he spent six more months in hiding, holed up in the home of his girlfriend Kathleen, and the others have noticed that Johnny seems to have gone a little bit soft. Both Kathleen and Johnny's lancer Dennis urge him to sit the robbery out, but he refuses.

It turns out that they were right to worry. Johnny has a dizzy spell at the worst possible moment as the gang is escaping from the textile mill. He's stopped by a man from the mill, and in the struggle the mill worker is fatally shot and Johnny is seriously wounded in the arm. To make matters worse, he can't get into the car during the frantic getaway and eventually falls out onto the street as the car careens through Belfast. Johnny staggers away and eventually finds a temporary hiding place in an old bomb shelter. He spends the next several hours bouncing around Belfast, getting steadily weaker and weaker from loss of blood, while Dennis and Kathleen try to save him, the police try and catch him, and various civilians either try to stay uninvolved or seek to turn him in for the reward.

It's considered a classic of British cinema, winning the inaugural BAFTA Award for Best British Film

and often gracing lists of the best British films of all time.