Film / Nothing but Trouble 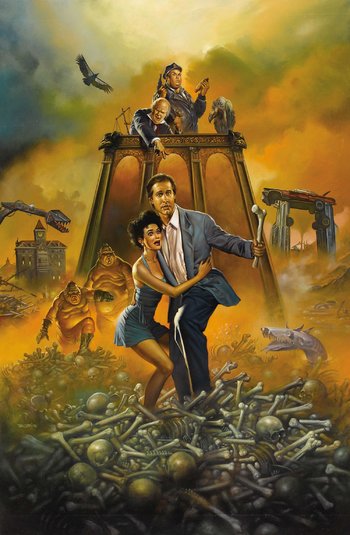 Welcome to Valkenvania, where your first offense will likely be your last...
"All they wanted was a little getaway. All they got was... Nothing But Trouble."
— Tagline
Advertisement:

A 1991 comedy film written (from a story by his brother Peter) and directed by Dan Aykroyd — his only turn in the director's chair to date. It stars Aykroyd (in a dual role), Chevy Chase, John Candy (also in a dual role), and Demi Moore (in one of her first post-Brat Pack films).

Chase plays Chris Thorne, an investment banker with his own newsletter. At a party, he meets financial lawyer Diane Lightson (Moore), who he offers to drive to Atlantic City for an important meeting. Tagging along are two of Chris' wealthiest clients, eccentric Brazillian siblings Fausto (Taylor Negron) and Renalda (Bertila Damas). During their trip through the country, they make an ill-advised detour through the mining town of Valkenvania, where they are menaced by the corrupt and tyrannical Justice Alvin Valkenheiser (Aykroyd) and his family.

Not to be confused with the 1944 film starring Laurel and Hardy.