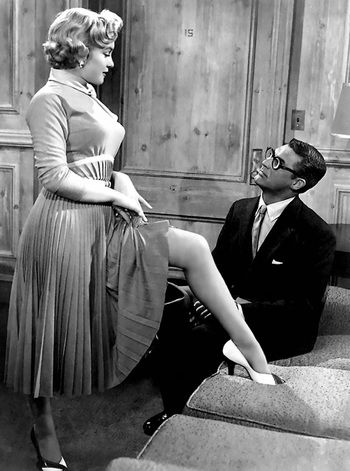 Dr. Barnaby Fulton (Grant) is a research chemist at a pharmaceutical company, trying to develop an elixir of youth. While he means well, his extreme absent-mindedness combined with his dedication to his work often cause him to neglect his wife Edwina (Rogers). Their relationship hasn't quite slid into Dead Sparks, but there's an element of dull routine as the two of them advance into middle age.

That is, until one day when one of the lab chimpanzees watches Barnaby fiddling with his flasks and beakers, trying to find the combination which will give him the youth potion. The monkey escapes from its cage, starts fiddling with the flasks and beakers, and winds up creating what turns out to be the real youth potion—namely, one that restores vigor and vitality and fixes stuff like back pain or bad eyesight, but doesn't actually make the person physically younger. Then the monkey dumps the potion, into the water cooler. Various madcap antics ensue.

Marilyn Monroe, then just on the cusp of superstardom, plays Miss Laurel, secretary to Mr. Oxley (Coburn), boss of the pharmaceutical company.

This film should not be confused with the classic 1931 Marx Brothers comedy of the same name.