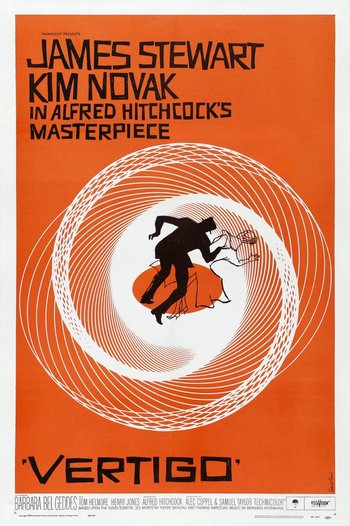 "Vertigo: a feeling of dizziness...a swimming in the head...figuratively a state in which all things seem to be engulfed in a whirlpool of terror."
— from the trailer
Advertisement:

Vertigo is a 1958 Psychological Thriller directed by Alfred Hitchcock, adapted from the 1954 French novel D'entre les morts ("The Living and the Dead") by Pierre Boileau and Thomas Narcejac.

Jimmy Stewart plays John "Scottie" Ferguson, a San Francisco detective who, because of a rooftop chase which leads to the death of one of his fellow officers, develops a paralyzing fear of heights. Having retired from police work, he is persuaded to go back on the job by his old college friend Gavin Elster (Tom Helmore), who wants him to trail his wife Madeleine who has been behaving oddly. As he observes the beautiful, mysterious Madeleine (Kim Novak), Scottie begins developing feelings for her — feelings that are reciprocated by her. However, Madeleine appears to be possessed by the spirit of her dead ancestor Carlotta Valdes, who is trying to get her to commit suicide. Scottie tries to help her out of this apparent madness, but in vain; he finds himself watching helplessly as Madeleine plunges to her death from the roof of a mission's bell tower, unable to reach her in time due to his acrophobia.

Scottie suffers a mental breakdown after his love's death, to the point of being institutionalized with a near-catatonic depression and "nursed" by his friend and former fiancée Midge (Barbara Bel Geddes). Even after returning to some semblance of a normal life, he is haunted by his grief for Madeleine, constantly seeing her in women he meets. It turns out that there is one woman who really does look a lot like Madeleine: a sharp-tongued brunette named Judy Barton (Novak again). Still haunted by the memory of his dead love, Scottie pursues a relationship with Judy. But the ghosts of the past never die, and their consequences prove to be what no one expected...

The film was released to mixed reviews and modest box office results. Critics complained of the film being overly long, slow and too "bogged in detail." However, by the late 1960s scholar Robin Wood re-evaluated the film to be "one of the four or five most profound and beautiful films the cinema has yet given us." Removed from circulation in 1973, it remained somewhat obscure.

The movie was re-released to cinemas in 1983 and on home video in 1984. This time it was a commercial hit and reviews were overwhelmingly positive. By the end of the 1980s, Vertigo was regarded as one of Hitchcock's best films and highly significant in film history.

If it's the comics company you're looking for, search no further than Vertigo Comics. For the record label, see Vertigo Records.