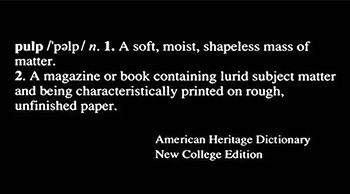 Trope n. A conceptual figure of speech, a storytelling shorthand for a concept that the audience will recognize and understand instantly.
Advertisement:

A trope commonly seen in trailers for movies and video games as well as in the actual material where one of the first things shown to the viewer is the definition of an existing but uncommon word or one that solely exists within the fictional universe portrayed. Either way, the word tends to be central to the story. The definition tends to be formatted as if coming straight out of a dictionary or encyclopedia and may include a reference to an actual in-universe book.

Starting a speech with a dictionary definition is widely considered to be a lame way to format an introduction. It's a stock gag for a speech to start this way to signal that it's low-effort or foolish. A common variant is to have the speaker define a similar but completely different word by mistake.

Oftentimes the word will be an Arc Word.

Sub-Trope of Epigraph. Compare From the Latin "Intro Ducere".