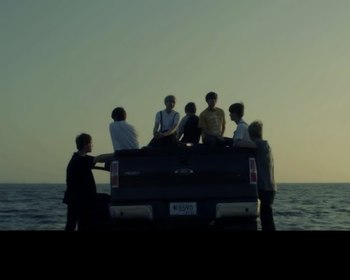 "After returning from the sea, we were all alone."
— Jin, The Most Beautiful Moment In Life: The Notes
Advertisement:

The BTS Universe (also known by fans as the "Bangtan Universe", the "HYYH Series", or its Officially Shortened Title "BU") is a multimedia original story comprised mainly of a series of Concept Music Videos from Korean group BTS, created by them and BigHit in collaboration with Lumpens and (occasionally) GDW.

The series officially started with the music videos from the 화양연화 (Hwa Yang Yeon Hwa, or The Most Beautiful Moment in Life) album series, continuing through WINGS and the LOVE YOURSELF series, and is currently still ongoing, expanding into short films, literature, and even webcomics. Not all of the music videos they have released since the start of the series are part of the BU - the ones that unquestionably are have a "BU belongs to..." disclaimer in the YouTube video description. But even then, it has teased connections even to videos that came before the series officially began.

Here, each one of the BTS members plays a fictional character both named after and partly inspired by their real-life counterpart, with the members themselves having input in the story: in an environment where Adults Are Useless, seven boys of various ages find company in each other at school for a year. 2 years later, oldest member Jin tries to Set Right What Once Went Wrong and fix the series of events that led to tragedy after the group's separation.

The storyline is closely linked to the general narrative and themes present in BTS' music, both containing a Coming-of-Age Story: the beauty and struggles of youth (Hwa Yang Yeon Hwa), facing temptation and inner conflict (WINGS) and the idea of trying and failing to love and be loved while hiding under a mask (LOVE YOURSELF) translate into the characters dealing with school and societal pressures, poverty, family and mental health issues, fear of the future, maturity, regret, and so on. A select few BTS' songs even directly reference or hint at events and concepts from the storynote The most notable being "Stigma", "The Truth Untold", and "Jamais Vu".

Also, the series is a complete Mind Screw. With a story told in Anachronic Order, and lots and lots of symbolism, half the fun of watching the series is making or following up on theories and putting together the puzzle pieces of the story across its entries in various media. Along with the music videos, these include SAVE ME, a Korean webtoon that tells the main conflict in a straightforward linear structure (working as the series' Mind Screwdriver and an alternative entry to the series for newcomers), and The Most Beautiful Moment In Life: The Notes, a series of diary-like narrations from the point of view of each one of the characters at various key moments of the story, originally found in the LOVE YOURSELF physical albums and later released as a novel.

Other clues for both concepts and key events have been found in other music videos, trailers, concept pictures, tour VCRs, live shows, and even commercials and selfies note A 2017 selfie uploaded on BTS's Twitter (of Jin holding some flowers, with "Smeraldo" as the only caption) led to the discovery of an entire blog

(now closed) of a flower shop dedicated to selling and explaining the backstory of the Smeraldo, a fictional flower that has an important role in the series. So yes, anything can be a clue.

In August 2019, during the first Big Hit Corporate Briefing with the Community

, Bang Si-hyuk announced plans to keep expanding the BTS Universe as a trans-media story, including the future release of a Korean Drama series about the boys' first meeting (with the members being portrayed by professional actors) scheduled for late 2020 to early 2021, and a mobile game developed with Netmarble (also responsible for the game BTS World), the latter of which will feature live-action scenes with acting from the members as well as 3D animation, the announcement of which was accompanied with an "Official Art Concept Teaser"

In February 2020, in the second BigHit Corporate Briefing

, along with the announcement of the second volume of The Notes, there was also an announcement of the release of "graphic lyrics"- 5 picture books with illustrations that aim to "convey the lyrical experience" of 5 songs that "started" in the BU: "House of Cards", "Save Me", "RUN", "Butterfly" and "A Supplementary Story: You Never Walk Alone".

In July 2020, after more than a year of silence, the official account Smeraldo Books

started posting excerpts of new unpublished Notes. In July 29th, however, something new was added to the mix: the new Note

was followed by a two-option choice determining the narrating character's actions, with a Twitter survey for fans to answer with 24 hours to spare. This would lead to the announcement of a new mobile game titled BTS Universe Story, described as a sandbox-style game with a story creation system (links to pre-registration through its official page

). The official trailer can be seen here

A drama adaptation titled Youth has been in production.

WARNING: This series deals with some heavy themes and violent/possibly triggering content that is generally Darker and Edgier than most of BTS' music. These include murder, mental illness, suicide, and physical/emotional abuse by parents and figures of authority. The first video of the series has a censored version for a reason.

The videos and content that are explicitly part of the series - and are essential to understand the story - are (in order of release):

Specific portions of the series provide examples of: