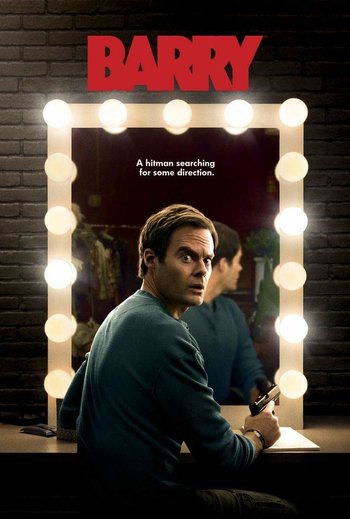 Barry is an HBO comedy-drama series, debuting in March 2018, created by Bill Hader and Alec Berg. The series' second season premiered in March 31, 2019. A third season was postponed due to the COVID-19 Pandemic, but was eventually released in April 2022, and as of this writing a fourth season is in the works.

Hader stars as Barry Berkman, a veteran of the Afghanistan war who now works as a hitman. Increasingly unhappy with his job, Barry suffers from depression and a lack of sleep as he struggles with the guilt caused by his lifestyle and his actions during his military service. His depression isn't helped when he's sent out to Los Angeles for a job and he finds out that his latest target isn't the usual criminal dirtbag, but rather a fitness instructor who's having an affair with the wife of a Mafiya kingpin. Barry follows the fitness instructor around and winds up tailing him to—an acting class. Barry is bit by the acting bug and uses his newfound passion as an outlet for his past deeds, all while attempting to leave his violent past behind him.

Stephen Root plays Fuches, Barry's shady "uncle" and his handler in criminal affairs, who is none too thrilled about Barry pursuing a new career and continually drags Barry into crime against his wishes. Henry Winkler plays Gene Cousineau, the teacher of Barry's acting class and his mentor. Sarah Goldberg plays Sally Reed, a member of the class and a struggling actress who becomes Barry's love interest.

The first season consists of eight episodes, each thirty minutes in length. Along with creating the show, Hader also serves as its main star (in addition to writing and directing many episodes). It was very well-received upon arrival and would ultimately garner many award nominations and wins, including Outstanding Lead and Outstanding Supporting Actor in a Comedy Series at the 69th Annual Emmys for stars Bill Hader and Henry Winkler, respectively.

Following the success of the first season, a second was ordered by HBO almost immediately. Bill Hader continues to write, direct, and star as everybody's favorite depressed hitman. This season was every bit as well-received as the first, garnering even more critical praise and award nominations; Hader himself would once again take home the Emmy for Outstanding Lead Actor in a Comedy Series.

Barry realizes that the abusive husband from his girlfriend's play is a real person.

Barry realizes that the abusive husband from his girlfriend's play is a real person.