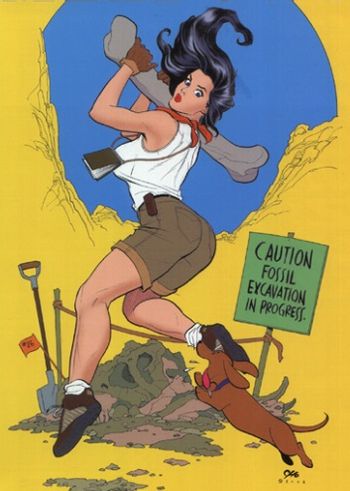 Are you sure it's the bone that dog is after?
Advertisement:

Uh-oh. There's a dog loose at the natural history museum! The museum is full of priceless fossilized dinosaur skeletons, worth millions upon millions of dollars. And we all know what dogs like to munch on, don't we? Prepare to see the little pooch walk out the door with a jumbo-sized femur in his mouth, and to hear the sound of many bones collapsing into a pile in the background.

Of course, this would not actually happen in Real Life. Fossil bones have been fossilized over all the millions of years they have spent lying around underground, and would not attract a dog's attention any more than a rock would (in a sense they are rock, and much too heavy for a single dog to carry). In any case, most museums do not take the risk of setting the priceless skeletons out in the open where they could be damaged; those are actually plaster recreations directly modeled after the authentic bones. Not to mention, they're also either in glass cases or mounted on metal frames so they can't fall apart.

Often spotted in comedies and cartoons. Has something to do with the vague association most people have between dinosaurs and bones; to the point that many museum visitors believe that every mounted skeleton in a museum is some kind of dinosaur.