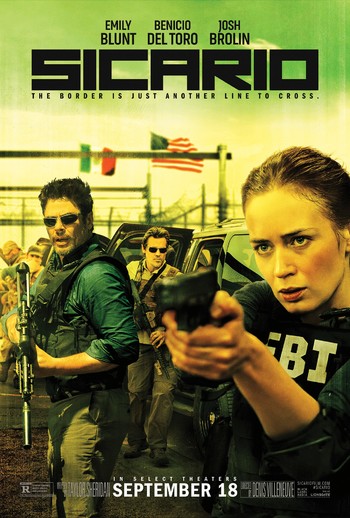 Sicario nmf /si.'ka.rjo/ (asesino a sueldo)
assassin or hired killer; hitman.
"You ask how the watch is made. Keep your eye on the time."
— Alejandro
Advertisement:

The film tells the story of Kate Macer (Blunt), an idealistic FBI Special Weapons and Tactics Teams agent, who is enlisted by government official Matt Graver (Brolin) to aid in a joint task force — which includes his mysterious partner, Alejandro Gillick (del Toro) — in tracking down an anonymous drug lord.

Kate, wishing to avenge the deaths of two of her fellow officers that that the drug lord was apparently responsible for, jumps at the call, but as the task force digs deeper into the cartels, their methods become more and more questionable, and Kate begins to wonder whose side the task force is really on — and whether she has gotten in over her head.

A sequel, Sicario: Day of the Soldado, followed in 2018 with a new director (Stefano Sollima). Prior to its release, a third film was announced to be in development; its name was announced as Sicario: Capos in early 2021.