Film / Sicario: Day of the Soldado 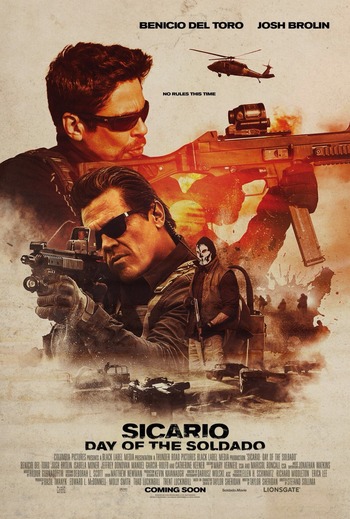 "How do you define terrorism?"
Graver: You gonna help us start a war.
Alejandro: With who?
Graver: Everyone.
Advertisement:

Sicario: Day of the Soldado is the 2018 sequel to Sicario.

The film stars Benicio del Toro and Josh Brolin, reprising their roles from the last film. Writer Taylor Sheridan returns for script duties as he did on the first film while new director Stefano Sollima (Gomorrah, All Cops Are Bastards) steps into the director's chair instead of the first film's director Denis Villeneuve.

Matt Graver calls on Alejandro Gillick when Mexican drug cartels start to smuggle terrorists across the U.S. border. Things escalate even further when Matt and Alejandro kidnap a top kingpin's daughter to deliberately increase the tensions and ignite a war between cartels.

Producer Trent Luckinbill mentions that a third film, Sicario Capos, is currently in development with plans to start production in Spring/Summer 2021.

Sicario: Day of the Soldado contains examples of:

"Let's talk about your future."