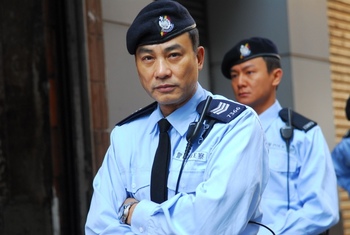 The series kicks off with the release of the first movie, PTU: Police Tactical Unit in 2003, directed by Johnnie To. The main character, Sergeant Mike Ho (Yam) of the Hong Kong Police Department have to assist his chubby, accident-prone colleague and OCTB officer, Sergeant Lo Sa (Lam) to find his missing police revolver, and end up uncovering a gunrunning plot which they have only one night to thwart. The movie is notable for its portrayal of Hong Kong Police Officers' willingness to bend the rules to achieve results of their investigations.

The movie notably won Johnnie To and Simon Yam the Golden Bauhinia Awards and Golden Horse Film Festival and Award for directorial and acting efforts.

Five sequels were made, with Simon Yam and Lam Suet reprising their roles. Although Johnnie To serves as producer for all the movies, he only directed the first.

The entire series, listed in chronological release order, are as such:
Advertisement:

This series of movies contains the following tropes: