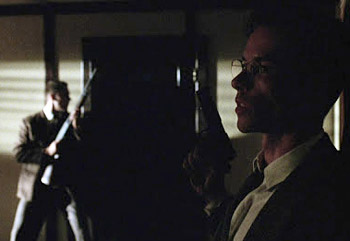 "I trust you can shoot in the dark."
— Harold Finch, Person of Interest, ".exe"
Advertisement:

The Denouement of any number of made-for-TV thrillers in the 80s. The hero pursues the villain through a darkened building. They both have guns. They shoot at each other. The guns flash brightly in the dark. The shots echo and ricochet. Finally the hero has One Bullet Left. The villain has moved round behind him in the dark. He is about to shoot. The hero turns and fires his last bullet. The villain is shot squarely in the chest. He flies back (for extra points he falls a huge distance over a balcony or into a stairwell). The villain lands, dead, on his back, eyes open and staring. Focus on face. Cut to hero returning to the sunlit world outside. Final Aesop if any, roll credits.

This type of climax also showed up in quite a few otherwise light-hearted films during the decade. Compare Abandoned Warehouse. May involve Muzzle Flashlight. In Video Games, tends to overlap with Blackout Basement.