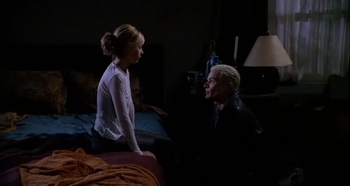 "You listen to me. I've been alive a bit longer than you, and dead a lot longer than that. I've seen things you couldn't imagine, and done things I'd prefer you didn't. Don't exactly have a reputation for being a thinker. I follow my blood, which doesn't exactly rush in the direction of my brain. I've made a lot of mistakes. A lot of wrong bloody calls. A hundred plus years, and there's only one thing I've ever been sure of: you ... Here, look at me. I'm not asking you for anything. When I say "I love you", it's not because I want you, or because I can't have you. It has nothing to do with me. I love what you are. What you do, how you try. I've seen your kindness and your strength. I've seen the best and the worst of you. And I understand, with perfect clarity, exactly what you are. You're a hell of a woman. You're the One, Buffy."
—Spike
Advertisement:

With Buffy gone, the rest of the gang sit around and debate how they are going to deal now that they don't have Buffy making decisions for them. In the midst of their debating and arguing, the power goes out and Faith concludes the power company has left town and taken the power with them. Meanwhile, Buffy watches as people load up their cars and plan to escape the city, then breaks into a house in search of a place to stay. The owner is still there, but Buffy quietly convinces him it's a smart idea to leave town because nothing in Sunnydale belongs to any of them anymore.

At the Gilroy mission, Andrew talks incessantly to Spike while the vampire waits for the sun to go down again. Worried about Buffy, Spike temporarily gets Andrew to shut up and they continue to wait. Down in the Summers' basement, Faith and the others talk about their plan and their enemies. Kennedy pushes for a say in decisions, but Faith steps up and makes it very clear that, now that Buffy's gone, she's the leader they all voted for and they all need to accept that, and the Potential reluctantly backs off. Faith decides they should go after the Bringers to attempt to gain information about the First Evil or Caleb from one of them. Kennedy walks alone down an alley until a Bringer steps out of the shadows and tries to attack her. The Bringer is ambushed by the rest of the Scooby Gang and taken as a captive. Back at the house, they find that the Bringer is without a tongue. Dawn suggests a spell she read about in an old Turkish text used to communicate with the dying that would allow them to hear from the Bringer.

Andrew and Spike return to the Summers residence. When Spike asks about Buffy, Willow tries to explain with an embellished version of what happened the previous night. Spike is not convinced that Buffy would "take a time off" during an apocalypse and realizes that the others turned their back on Buffy by kicking her out. Furious over their betrayal, he snaps at them for being ungrateful after all that she has done for them. When an unimpressed Faith interrupts his speech, Spike physically attacks her, going so far as to taunt her, claiming that she has always been jealous of Buffy's life and demanding to know where Buffy has gone. After admitting she doesn't know, Faith stands prepared to continue, but Spike has lost interest. He steps outside to catch Buffy's scent and follows the trail in search of Buffy.

In the basement, Willow uses a spell to get the Bringer to talk, while Kennedy, Giles, Xander, and Andrew sit around waiting. Andrew begins to talk whilst the group wonders if the spell worked, but they soon realize that he's speaking for the Bringer. He explains that the Bringers are everywhere preparing for battle, taunting them until Giles becomes angry and slashes the Bringer's throat, breaking his spell on Andrew, who complains that it could have magically led to his own beheading.

Spike finds Buffy curled up in a bed at the house she broke into. He notes that Sunnydale has gone to hell, as he didn't even need an invitation. He tells her about the vineyard and what they found: she was right. But Buffy doesn't seem to care anymore and is ready to give up. Spike tries to convince her that she shouldn't listen to what they said, reminding her of everything that ever happened, but she never gave up.

Giles and Faith look over a map as they plan to begin a search through the sewers for the Bringer's hideout and decide to attack there the next day. As Giles leaves, the First in the form of Richard Wilkins appears to Faith. She knows what he is and isn't fazed, but he prods anyway, praising her for kicking Buffy out and warning that Buffy is a dangerous threat.

Meanwhile Spike works to convince Buffy that she is still needed. She talks about how she detached herself from the Potentials and how detaching herself from people is something she's done for as long as she's been the Slayer. Spike talks about how much he admires her but that this wasn't about his feelings. He says that he knows every side of her and in all the years of his unlife she's the only thing that he was always sure of, but she answers she doesn't want to be the one. Spike starts to leave so Buffy can rest, but she asks him to stay and just hold her.

Robin interrupts Faith and they talk about the First's visits with both of them and the effect it had. They express their apprehension about the coming battle, then Faith takes things in a different direction. They kiss and tumble onto the bed.

Willow returns to her room to find Kennedy waiting for her and all of the other Potentials gone from the room. They kiss, but Willow breaks it up, worried that if they let things go too far, she will lose the self-control that she has been working for and something bad may happen. Kennedy convinces her that everything will be okay and she will "anchor" Willow, then the two get back to kissing. Buffy and Spike continue to hold each other, while Anya and Xander, Faith and Robin, and Willow and Kennedy all have sex. The First talks to Caleb about the gang and the knowledge that they are all taking comfort in each others' arms. The priest answers with how he has its strength inside of him and the First's need to feel. The next morning, Faith gives out her orders to the gang, sending some to go find Buffy and others to help her investigate the sewers. Spike wakes up to find Buffy gone and a note left in her absence.

At the vineyard, the First talks with Caleb about their progress, but the First is impatient, worried that Buffy may get her hands on what they have. A Bringer is tossed down the stairs of the cellar and the real Buffy stands at the top, asking for whatever it is Caleb has of hers. Buffy goads Caleb into attacking her, but instead of taking a beating, she keeps her distance and avoids his blows. In the sewers, Faith and the girls find the Bringer's lair and the Bringers that live there. Meanwhile, as the battle with Caleb dies down, Buffy spots a trap door in the floor and dives through it. The girls battle with the Bringers, eventually disposing of all of them. After the fight ends, Kennedy finds a stairway that leads to an area below the sewers. Buffy finds a weapon embedded in a rock, while Faith finds a locked metal box. Faith breaks open the box only to find a bomb inside, ticking away with a few seconds to go as she tells everyone to take cover.