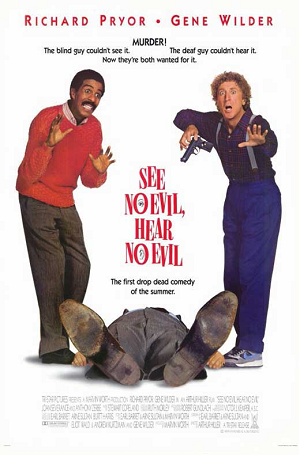 See No Evil, Hear No Evil is a 1989 American comedy Buddy Picture directed by Arthur Hiller starring comedy duo Richard Pryor and Gene Wilder in their third collaboration onscreen.note The critical box office failure Another You (1991) proved to be the last collaboration of Pryor and Wilder

When David Lyons (Wilder) hired Wally Karew (Pryor) at his concession shop, both men didn't expect to witness a murder. Unfortunately for them, Wally, as a blind man, only heard the gunshot while Dave, as a deaf man, had a brief glimpse of the murderer so their relative uselessness as witnesses made them the prime suspects of a crime they didn't commit. Hilarity Ensues as they work together to stop the real criminals whilst being chased down by the police.