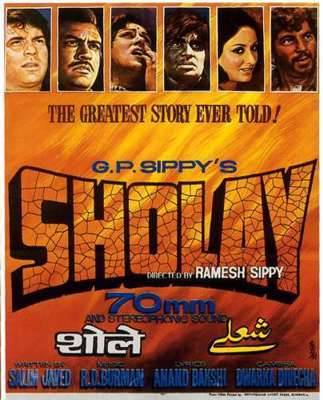 Sholay (Embers) is the biggest hit in Indian cinema history, a Bollywood film from 1975 directed by Ramesh Sippy and featuring Amitabh Bachchan, one of the most famous actors in the business. The plot features Bachchan and Dharmendra as Jai and Veeru, two former thieves hired by Baldev Singh (Sanjeev Kumar), a former police officer who is the thakur (major landowner) of a small rural village. Their mission is to capture the infamous bandit Gabbar Singh, against whom Thakur has a personal grudge. On the way they have plenty of hijinks and even fall in love, Jai with Thakur's widowed daughter-in-law Radha and Veeru with the chatty horse cart driver Basanti (Hema Malini).
Advertisement:

If Mother India is Bollywood's Gone with the Wind, then this is its The Good, the Bad and the Ugly. From a business perspective, it's also Bollywood's Star Wars, or perhaps Raiders of the Lost Ark: Just as those productions cemented the Summer Blockbuster as the economic engine of Hollywood from the mid-1970s for the next 40+ years, Sholay made the masala film

the economic engine of Bollywood for pretty much the same period. Subject of a truly disastrous remake in 2007 under the name Aag (Flame).