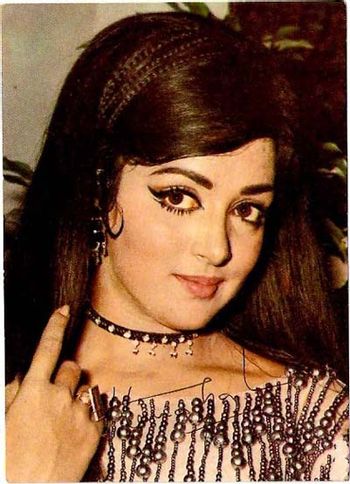 Nicknamed the Dream Girl, Hema Malini (born 16 October 1948) was an extremely popular and prolific Bollywood actress, starring in over 150 films between the late sixties and mid-eighties. In her heyday, she was noted for her skills as a classical dancer and her ability to play both comic and dramatic roles. She was considered the most beautiful woman in Bollywood, and one of her unrequited suitors died unmarried, allegedly because he decided that if he could not marry Hema, he would marry no one.

Her bigamous marriage to Dharmendra was highly controversial. The nearest parallel in Hollywood might be the public reaction to the affair between Elizabeth Taylor and Richard Burton (both then married to other people) when they were filming Cleopatra. In Hema's and Dharmendra's case this controversy came from a number of factors: his married status, the numerous other marriage proposals that she had received and turned down, and her reputation in the industry as a very pious, ladylike woman who just didn't do things like that. She and Dharmendra have two daughters together: Esha Deol and Ahana Deol. She is also on amicable terms with his sons from his first marriage: Sunny Deol and Bobby Deol. She is mostly retired from acting, but sometimes produces or directs movies.

Her most famous films include: